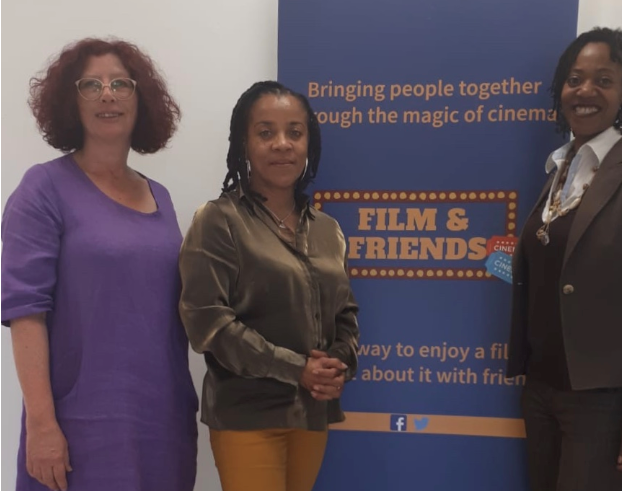 Film and Friends from Josephine Melville on Vimeo.

SEACA, South Essex African Caribbean Association and AAP, Arts Aspirational Partnership were talking about how many people feel isolated and lonely these days, despite all the ways we can stay in touch, and how difficult it can be to join new groups by yourself. But – going to the pictures is a near universal experience in our society, and we thought that we could look at ways to bring people together in a sociable but non-pressured way, for conversation and chat, through a trip to the cinema.

We talked to SECE Mind, who were keen to help, as activities and services help their users, and the Southend Odeon has made it possible for us to offer the tickets at reduced rates. This was a pilot project, and as the project developed, we also were able to see that there were many ways the idea could grow and be adapted for different groups.
The advertising campaign began and Film and Friends was born.

Film and Friends is a pilot project for Southend that seeks to bring people together for conversation through the medium of cinema, a chance to meet new people and try new things, especially for anyone who feels lonely or isolated. Lots of people feel uncomfortable attending events, including the cinema, on their own. Film and Friends offers a friendly, low-key chance to come and see a film, and then have a chat over tea or coffee.

The project ran from 13 February 2019, meeting at the Odeon Southend every fortnight until the end of May. Afterwards, we provided tea and refreshments at the Cultural Assembly’s, Folded Space.
Great opportunity to meet new people discuss film and more….
The people let me have a good say….

These sentiments were repeated regularly at sessions, where attenders would say that the opportunity to discuss and talk was one of the most important aspects. The project has been devised by SEACA, AAP, in partnership with SECE Mind, and is funded by SBC’s Culture and Wellbeing Fund. The pilot is open to adults over the age of 18 who live or work in Southend.
A major and unexpected output of one of the attenders (Michael Cairey) and a London-based artist, Sophie Jones, sharing the theme of mental health and wellbeing. This was supported by AAP and SEACA on top of the Film and Friends activity financially and organisationally. This came out of the conversation one day, when Michael shared that he enjoyed painting. He brought one in to show the group, and we felt it deserved a wider platform, along with the other pieces he had produced. This was the first time that either artist had exhibited their work to the public.